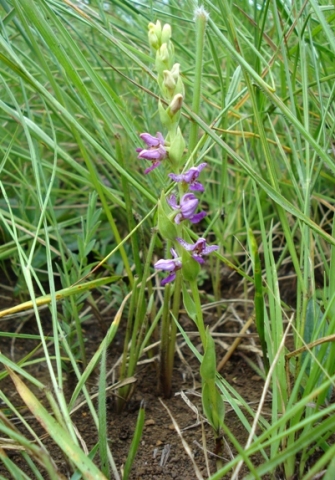 Brachycorythis tenuior is a slender perennial herb, a terrestrial orchid with tuberous roots. The Latin word tenuior acquired by the plant as its specific name means thinner, slenderer or more delicate.

B. tenuior is an erect, hairless plant growing to heights from 20 cm to 50 cm. Lance-shaped leaves ascend and reduce slightly in size up the stem.

The large species distribution is in South Africa (KwaZulu-Natal, Gauteng, Mpumalanga and Limpopo, as well as in Lesotho) and to the north in many countries of tropical Africa.

The habitat is the margins of vleis and bogs, grassland and woodland, particularly in clearings. The species is not considered threatened in its habitat early in the twenty first century (Lowrey and Wright, 1987; www.zimbabweflora.co.zw; www.redlist.sanbi.org).