Home » TYPES » Shrubs » Anisodontea anomala
Back to Category Overview
Total images in all categories: 11,538
Total number of hits on all images: 6,618,454 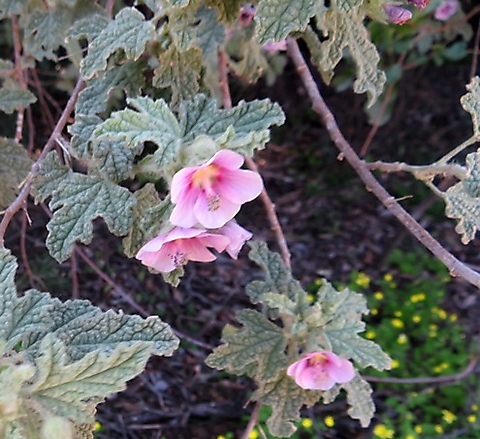 Anisodontea anomala is a single-stemmed, woody shrub with thick leaves reaching heights from 1 m to 2 m.

The species distribution is in the Western Cape and the Northern Cape from the western Karoo to central Namaqualand, but also known in the Richtersveld and near Beaufort West. The photo was taken in the Biedouw Valley.

The habitat is low (winter) rainfall, sandy flats and stony slopes, often near watercourses. The species is not considered to be threatened in its habitat early in the twenty first century (Bond and Goldblatt, 1984; iNaturalist; www.thegardener.co.za; http://redlist.sanbi.org).