Home » REGIONS » Langkloof » Bracket fungus from below
Back to Category Overview
Total images in all categories: 11,635
Total number of hits on all images: 6,753,080

Bracket fungus from below 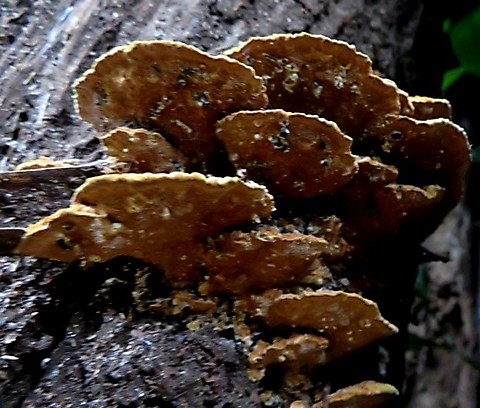 Previous
Image 9 of 41
Next

There may be one to numerous such conks close together, collectively weighing several hundred kilograms. Most are not shiny but usually brownish on top, their texture woody and their structure often horizontally layered and crusty.

The spores found below, positioned in pores, are usually white but become dark when damaged. These fungi usually occur widespread; some of them are estimated to release 30 billion spores per day.

The Ganoderma genus of such fungi is widely used medicinally in China, less so in the West. There are about twenty species of Ganoderma fungi in South Africa, including one called Ganoderma africanum. South Africa also has bracket fungi belonging to the Trametes and other genera.

As with fungi in general, bracket fungi identification can be tricky. Picking the edible bracket fungus, one has to be conversant with features such as their height, habitat, spore print, season, gills and pores (www.ediblewildfood.com; www.centralcoastbiodiversity.org; Wikipedia).