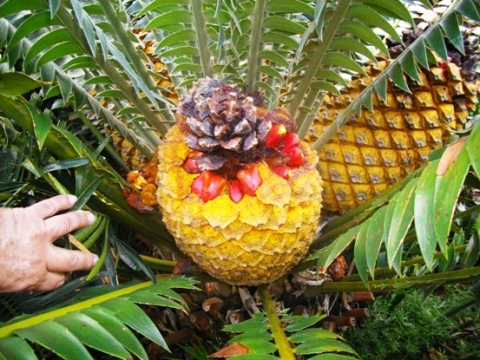 The seeds of the Modjadji cycad protected by the cone scales are oblong, up to 5 cm long and half as wide. They are bright red or orange-red and can be seen in the picture taken in April in Johannesburg. Seeds are being released gradually from the top of the cone. Fertile seeds can be obtained when a male or pollen cone on another plant has ripened at the right time for pollination to occur in the female or seed cone.

Vervet monkeys play a role in distributing cycad seeds in nature in South Africa. They and baboons eat some of the seeds by breaking the hard shells with their teeth, but some are dropped and may grow; seed dispersal duties have a price. The seeds are said to remain viable for about three years. Where they have been left lying undisturbed as in this garden, they germinate over time, delivering seedlings for later transplantation by patient people.

The seeds of Encephalartos transvenosus are large with a fleshy outer layer and an inner kernel. The fleshy outer layer is sometimes edible while the kernel is often poisonous. Some animals eat the seeds while others, like cattle have been reported to have died from ingesting them. Don’t eat them because it is difficult to distinguish between toxic and non-toxic ones (Coates Palgrave, 2002; www.wild-about-you.com; www.cycadinternational.com.au).