Home » GENERA G-H » Holothrix » Holothrix secunda
Back to Category Overview
Total images in all categories: 9,580
Total number of hits on all images: 4,309,565 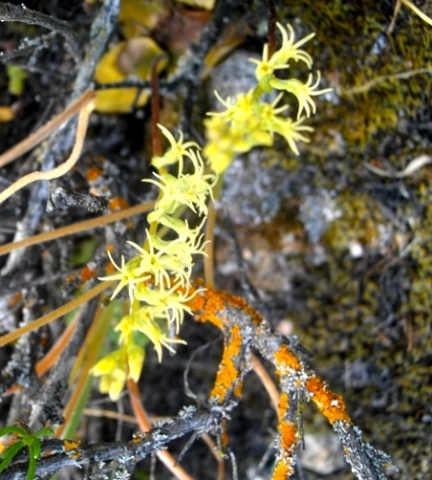 The delicate flowers of Holothrix secunda grow closely together in a one-sided spike, as do those of several other Holothrix species. The specific name of this orchid, viz. secunda, was earned by this feature of flowers all turning to the same side. The stalk, purple lower down and green among the flowers, is covered in a variable density of soft hairs.

The fragrant flowers have conspicuous lips with five nearly equal and spreading, narrow lobes. The two lateral petals, resembling these lobes, grow closely aligned to the sides of the lip. There is a small spur at the base of the flower, filled with nectar. Flower colour is yellowish green or cream, sometimes nearly white.

The flowers are probably pollinated by moths. Flower size varies from 5 mm to 10 mm in diameter. Flowering happens from winter to mid-spring (Liltved and Johnson, 2012; Vlok and Schutte-Vlok, 2010; Williamson, 2010).