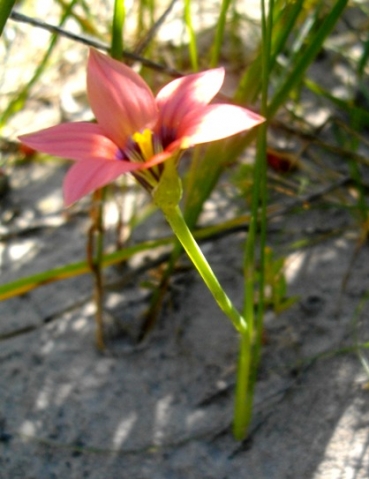 Previous
Image 3 of 20
Next

The flower of Romulea hirsuta grows solitary at a branch tip, the flower stem tending to branch and producing a few flowers. Flower colours vary from coppery orange or cerise to pink and rose. The corolla cup is yellow in the centre.

There are two varieties: The one in picture, R. hirsuta var. hirsuta, has dark markings around the lip of the corolla cup where the petal lobes spread around the yellow centre. R. hirsuta var. cuprea lacks the dark ring in the corolla. It is found in a more easterly part of the species distribution, from Hottentots Holland to the coastal strip east of Bredasdorp.