Home » TYPES » Trees » Zanthoxylum capense ripe fruit
Back to Category Overview
Total images in all categories: 11,506
Total number of hits on all images: 6,491,954 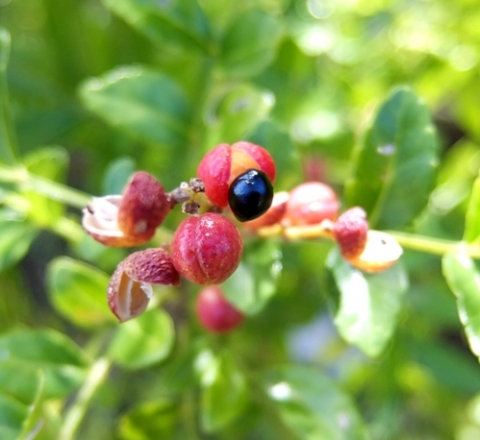 In this photo the Zanthoxylum capense fruits are ripe or past that stage, some already having split and released their seeds. One is in the process of doing so, the black seed half emerged for a period, a position described as typical.

The coarse, gland-dotted red surface of the fruit has a seam between its flattish hemispheres.

This species is variably dioecious, i.e. male and female flowers sometimes grow on separate trees, although not always as in fully dioecious species; there are thus some (flowering) trees that shall remain fruitless, therefore male, unless lazy (Coates Palgrave, 2002; Schmidt, et al, 2002).