Home » TYPES » Trees » Zanthoxylum capense leaves
Back to Category Overview
Total images in all categories: 11,506
Total number of hits on all images: 6,494,218 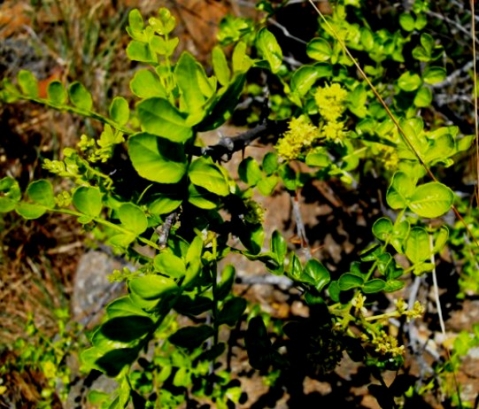 The leaves of Zanthoxylum capense are compound, spirally arranged to alternate and concentrated near the branch tips. The rachis is grooved on its upper surface. There are four to eight pairs of leaflets plus a terminal one. This terminal leaflet often drops off early. The leaflet shape is variable: ovate, obovate or elliptic. Leaflet size is also markedly variable.

When the leaves are crushed they disclose the secret of their family affiliation: at least the citrus part of the Rutaceae family shares the unmistakable scent.

The leaves are browsed by some mammals. Several traditional medicine uses involve the leaves, fruit, bark and roots of the Z. capense tree (Schmidt, 2002; Coates Palgrave, 2002).