Home » TYPES » Trees » Xymalos monospora leaves
Back to Category Overview
Total images in all categories: 11,506
Total number of hits on all images: 6,494,242 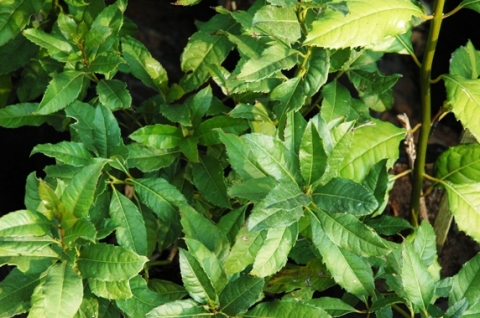 In the eastern coastal regions of South Africa and the north-eastern escarpment towards the Lowveld grows this monotypic tree known locally as lemonwood. It is known over much of Africa as it also grows as far as Cameroon and Sudan.

Xymalos monospora (SA Tree List No. 111) may reach 25 m in its habitat of moist montane forests. The trees are fire resistant, the old damaged stumps sometimes producing numerous coppice shoots to form dense shrubbery in degraded forest areas. Curiously the Afrikaans common name is lemoenhout (orange wood and not lemon wood). The tree has nothing to do with the citrus family or Rutaceae, although the crushed leaves have a citrus-like scent.

The bark is conspicuously marked, greyish brown with irregularly shaped worm-like patterns scattered along the trunk where flaking has occurred. The leaves are sub-opposite or opposite, rarely alternate, elliptic to ovate and dark green with gland dots on the surface. The indented midrib and lateral veins create a peculiarly quilted appearance. The leaf apex tapers, the base does as well and the margin is irregularly toothed.

The small yellow flowers grow in short axillary spikes in winter and spring. The tree is dioecious; male tree flowers show clusters of stamens, female ones have ovaries. The fruit is an ellipsoid fleshy drupe, seen ripening on the tree in summer and autumn, although the green ones may remain there for nearly a year (Coates Palgrave, 2002; Schmidt, et al, 2002; Wikipedia).