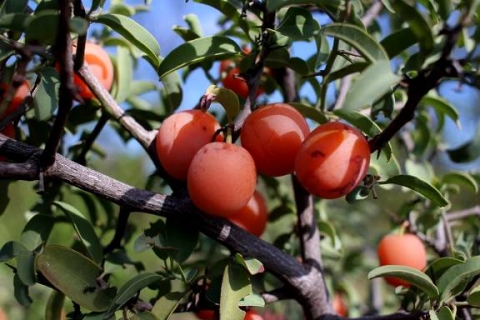 The flowers of Ximenia americana var. microphylla grow in short, branched heads or in cymes of several flowers on one stalk from a spine axil. The plant is dioecious, male and female flowers occurring on different plants.

The small, greenish white flowers are white-bearded in their throats. Flowering happens from spring to early summer, in some regions a little earlier.

The ellipsoid fruit is a drupe, yellow to orange in colour, not red as the better-tasting fruit of the related X. caffra. Fruits are thinly fleshy, becoming about 2,5 cm long, smaller than those of the green-leaved X. caffra that overlaps in part of the plant’s distribution range. Fruits are present on the (female) bushes in summer.

The edible fruits are sour to slightly bitter but refreshing. The edible flesh of the fruit is also used in brewing beer or distilling vinegar. The seed kernels are collected as they yield an oil used to rub on the body or to soften leather, which is not the same thing.

The bark features in indigenous medicine in the treatment of some conditions in infants, also for treating constipation and to make an eye-wash.