Home » TYPES » Trees » Ximenia americana var. microphylla
Back to Category Overview
Total images in all categories: 11,506
Total number of hits on all images: 6,502,805 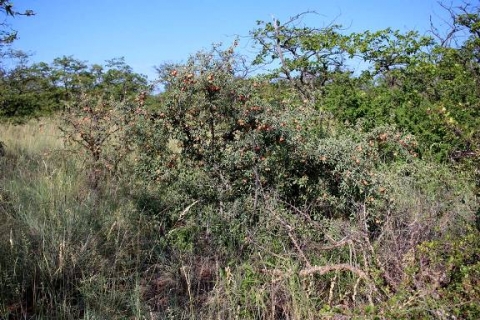 Ximenia americana var. microphylla, the blue sourplum, is a multi-stemmed shrub or small, thicket-forming tree reaching 4 m (SA Tree List No. 102). It is sometimes a root hemiparasite, attaching some of its roots to those of a nearby tree or trees for using their nutrients; in other cases it grows independently, feeding itself.

The bark is grey, varying in roughness, longitudinally fissured or with scattered whitish flecks. Upper branchlets have hard, straight lateral spines and are spine-tipped.

This variety is distributed in the northeast of South Africa, in all the provinces north of the Vaal River and in northern KwaZulu-Natal, as well as in tropical Africa.

The habitat is low altitude, inland, arid woodland, rocky thornbush and bushveld slopes, as well as coastal scrub. It is not considered to be threatened in its habitat early in the twenty first century (Coates Palgrave, 2002; Schmidt, et al, 2002; Van Wyk and Van Wyk, 1997; iNaturalist; http://redlist.sanbi.org).