Home » TYPES » Trees » Xanthocercis zambesiaca
Back to Category Overview
Total images in all categories: 11,506
Total number of hits on all images: 6,491,740 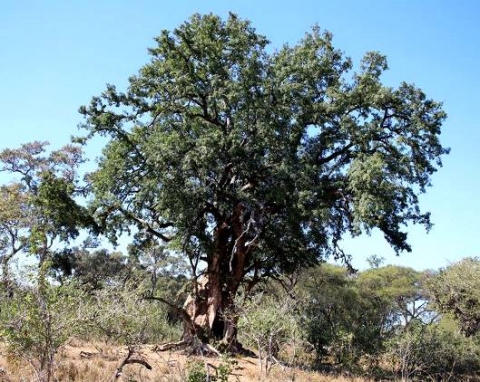 The canopy is usually dense, the pinnate leaves composed of up to seven pairs of small, oval to oblong leaflets, a terminal leaflet present. The leaflets are alternate to subopposite, dark green and glossy above, paler below. The leaflet petiolules are short and velvety as are the leaf petioles.

Cream-white, fragrant flowers in pea-flower shape hang down in 10 cm sprays during spring and early summer.

The species distribution is in the far north of South Africa, only in Lowveld parts of Limpopo and Mpumalanga, more widely in tropical Africa.

The habitat is riverbanks where the trees grow in alluvial and deep sandy soils or near termite mounds. The species is not considered to be threatened in its habitat early in the twenty first century.

The Xanthocercis genus comprises two species, only this one found in South Africa. The other occurs in tropical Africa and Madagascar (Coates Palgrave, 2002; Schmidt, et al, 2002; http://redlist.sanbi.org).