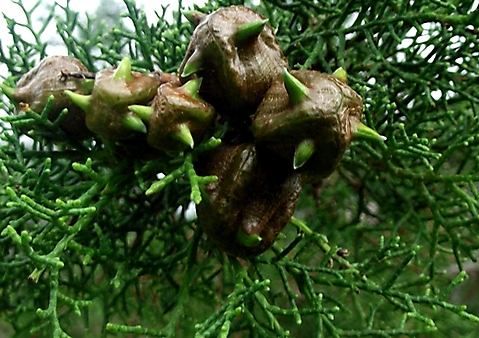 The woody, female Widdringtonia nodiflora cones are often partly hidden among the leaves. Lumpy to globose or angular with rounded ridges, the surface of such a cone is partitioned into four scales. The seams where the scales join show in the photo, like uncovered tectonic plates of a planet too small to reach spherical shape.

The scale surfaces may be smooth or wrinkled. The young cones in picture have a few warty outcrops, pale green with pointed tips and scattered along the surfaces, like the protrusions on old-style bombs or on new-style Covid viruses. Starting off silvery green, the cones become dark brown when ripe. Female cone diameter is about 2 cm.

The developing seeds harboured here are slowly getting ready for dispersal, the photo taken during March. This is the time when ripe cones are usually seen on the tree, although there may be cones in some stage all year round. Ripe cones will crack open at their seams, the scales functioning like valves when seeds are released (Coates Palgrave, 2002; Schmidt, et al, 2002; Van Wyk and Van Wyk, 1997; Pooley, 1993).