Home » REGIONS » Drakensberg » Volkameria glabra stem-tip inflorescence
Back to Category Overview
Total images in all categories: 10,856
Total number of hits on all images: 5,516,194 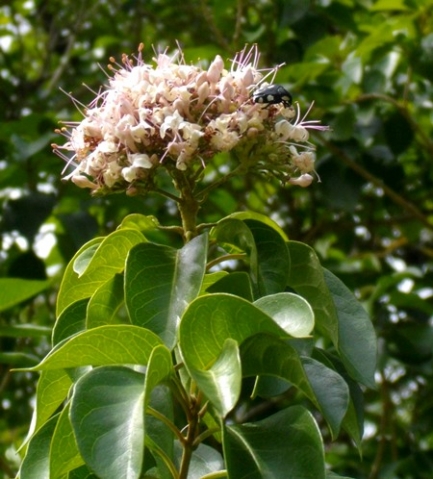 This dome-shaped Volkameria glabra inflorescence presents the long exserted stamens and styles of its flowers to about 7 mm. The four stamens of each flower have their white filaments tipped by small pale brown anthers. The styles may be longer than the stamens.

The buds still to open are cone-tipped, the open flowers have round-tipped petals that recurve and are shallowly channelled. A hint of pink is just perceptible on some corollas, sometimes more strongly present in flowers of the cat’s whiskers. Branching of the green flower stalks occurs in corymb-like, congested clusters.

The leaves are glossy above and darker than below. The series of lateral veins upon a blade half curve in and join the next higher one, rather than continuing to the margin.

Some long-protruding leaf-tip mucros are visible, while other leaves are more modestly endowed. The leaves in picture curve down along their midribs and curve in laterally.