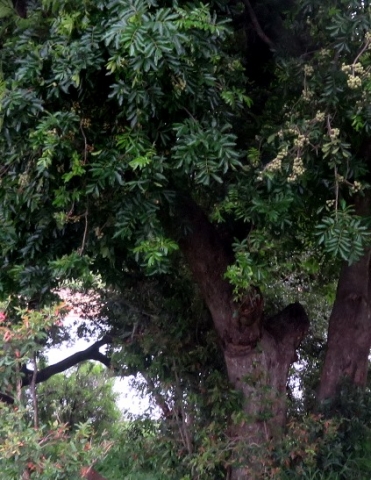 The bole of a large Trichilia emetica subsp. emetica tree, the Natal mahogany, is imposing. It is known as umKhuhlu in Zulu. The sturdy stem may branch from fairly low down, the crown well-rounded.

The imparipinnate leaf (compound with paired leaflets as well as a terminal one) has a notable shine upon its oblong, round-tipped leaflets. Up to five pairs of leaflets are usually grown.

The leaflets are not as dark green or shiny as those of T. dregeana, the forest Natal-mahogany but their tips are rounded rather than tapering to a point and the lateral leaf veins are more (13 to 16 as opposed to 8 to 12 on T. dregeana). The pale lower leaflet surfaces where the lateral veins are prominent are also hairier than those of T. dregeana. Some secondary veining is visible, clearly on the lower surfaces.

Mystery surrounds the darkness under the dense leaves where leopard or owl may spend the day in undisturbed privacy, like hotel rooms not requiring cleaning yet.

People suffering from insomnia may choose to scatter some Natal mahogany leaves in their beds as some indigenous people do… or simply believe more things and sleep better (Schmidt, et al, 2002; Pooley, 1993; Codd, 1951; iNaturalist).