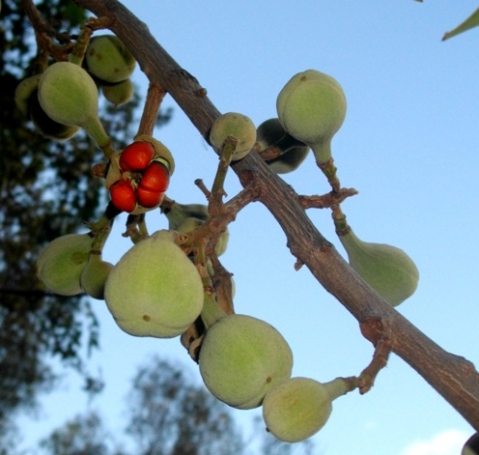 This photo shows the fruit-coloured stipe or elongated neck of the fruit of Trichilia emetica subsp. emetica that occurs at the fruit base, attaching to the stalk. The stipe may be up to 1 cm in length.

It distinguishes the species from T. dregeana that has fruits without necks. Local people use the fruits of these two species in the same way. There is another species, T. capitata, that grows north of the South African border in Zimbabwe and Mozambique. It is a scrambling shrub or tree with shorter leaves and smaller fruit.

The specific name emetica was given the tree for a well-known medicinal use made of the bark. The bark is soaked in water to produce an emetic or purgative. The seeds are sometimes sold along the roads in Mozambique as mafura nuts, but should never be eaten. The oil obtained from the seeds is used cosmetically or to make candles (Coates Palgrave, 2002; Schmidt, et al, 2002).