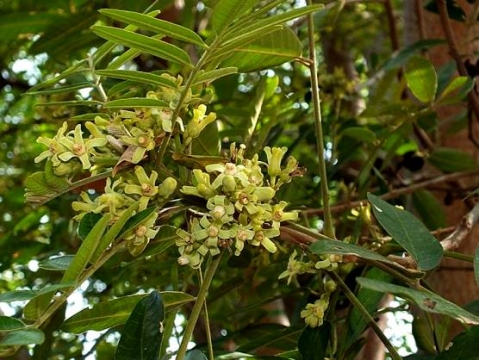 The sweetly scented flowers of Trichilia emetica subsp. emetica grow in dense heads, cymose panicles, at branch-tips and from upper leaf axils, becoming about 5 cm long. The calyx is five-lobed.

The tubular flower is silvery green to pale yellow and velvety, its five oblong petals recurving. Flowers become about 16 mm long. Male and female flowers are separate, growing on the same tree and superficially appearing quite similar. There are ten stamens with filaments united in their lower parts in the male flowers and a small, hairy ovary on the disc in the female ones.