Home » TYPES » Trees » Tarchonanthus littoralis
Back to Category Overview
Total images in all categories: 11,635
Total number of hits on all images: 6,753,102 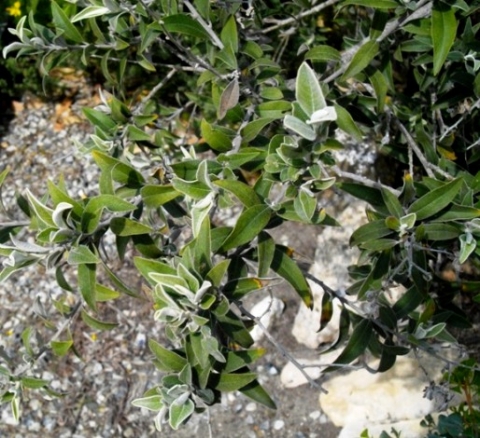 Tarchonanthus littoralis, the coastal camphor bush, was split off from Tarchonanthus camphoratus in 2002 as a separate species. It comprises the plants of the southern and eastern coastal regions of South Africa from the Cape Peninsula to KwaZulu-Natal. Although the original heterogeneous T. camphoratus species was split five-ways, the coastal camphor bush is still prolific, not threatened early in the twenty first century.

The dense, bushy shrub or small tree is found in diverse habitat conditions of rocky outcrops, slopes, dunes and along watercourses at low altitude, mostly in thickets and forest conditions. It often grows multiple stems that tend to be crooked.

Strips of the vertically fissured bark tend to flake off from older stems; the young stems being densely hairy. The tree resprouts after fire (Vlok and Schutte-Vlok, 2010; www.plantzafrica.com; www.redlist.sanbi.org).