Home » TYPES » Trees » Strelitzia nicolai fresh flowers
Back to Category Overview
Total images in all categories: 11,528
Total number of hits on all images: 6,611,305 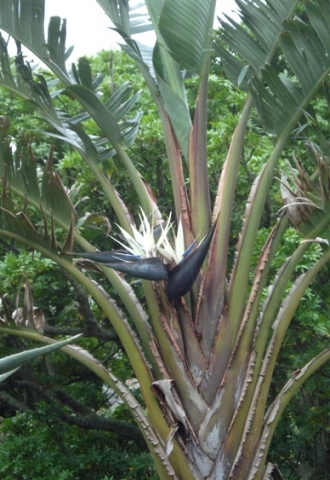 The two vertical ranks in which the leaves of Strelitzia nicolai are arranged like a fan are displayed here. The leaves are large and oblong, their glossy green blades usually torn by the wind. The leaf petioles become about 2 m long, channelled on the inside; each petiole base clasping the next higher, opposing one to form a plaited appearance. The margins of the channels dry out, becoming ragged, stiffly papery ridges.

This plant is S. nicolai because the petals are blue (and not white as in S. alba) and there is more than one sepal and petal harbouring spathe, boat-shaped and dark, in the inflorescence (and not a single spathe as in S. caudata).

The lowest spathe holds several flowers as well as a second spathe, again complete with flowers and yet another spathe. The sequence comprises up to five spathes, each holding flowers and positioned perpendicularly to the previous one. The flowers of each spathe follow those of the previous one in opening.

The white pointed structures, upper in the inflorescence, are sepals, not petals; three of them per flower. Two of the three petals, blue in the case of S. nicolai, form a beak-like or arrow-head resembling structure in which the five thin stamens and the hair-like style reside. The third petal is small and frilled, not contributing much to flower appearance (Coates Palgrave, 2002).