Home » TYPES » Trees » Strelitzia nicolai old flowers
Back to Category Overview
Total images in all categories: 11,528
Total number of hits on all images: 6,611,454 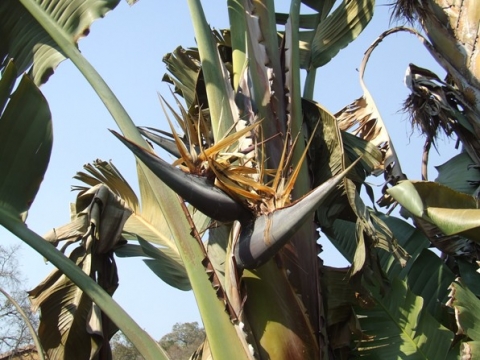 Strelitzia nicolai (SA Tree List No. 34) is similar to S. alba and S. caudata, all of them tree-like Strelitzia species of southern Africa. The distribution of S. alba is small, lying along the southern Cape coast, while the inland S. caudata grows in the Lowveld, eastern Limpopo and eastern Mpumalanga; beyond the border also in Zimbabwe and Mozambique. As S. nicolai is distributed coastally in KwaZulu-Natal, separating these species in identification is assisted for trees occurring in nature in their mutually exclusive distribution areas. For planted specimens the flowers should be inspected.

The positioning of the grey, boat-shaped spathes subtending the groups of flowers, occurs at right angles to each other as seen here. The withered, dull orange sepals of the flowers were previously white, while the previously blue petals, also smaller, are hardly visible here.

A slimy mucilage, a viscous secretion, is produced within the spathe. This fluid assists the tightly packed flower buds to escape from their casing upon opening.

Flowering occurs throughout the year, peaking in summer (Coates Palgrave, 2002).