Home » TYPES » Trees » Strelitzia nicolai
Back to Category Overview
Total images in all categories: 11,528
Total number of hits on all images: 6,611,600 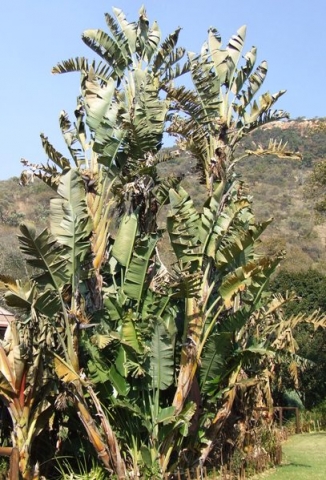 Strelitzia nicolai is a coastal tree of KwaZulu-Natal that received its common name of wild banana due to an obvious resemblance in the leaves.

The botanical name has more illustrious connotations: The nicolai being in honour of Czar Nicholas of Russia, presumably Nicholas the Second who died on 17 July 1918 in the Revolution. Queen Charlotte of England, wife of George III, who came from the German aristocratic house of Mecklenburg-Strelitz, is honoured in the generic name.  European royal families and, in fact the people on earth, are interrelated in ways as complex as are the plants that grow upon it.

S. nicolai under any name is a striking plant. It is worthy of its regal names, as well as of a position of honour in bigger gardens, especially along the southern and eastern coasts of South Africa (www.plantzafrica.com).