Home » TYPES » Trees » Sterculia alexandri flower
Back to Category Overview
Total images in all categories: 11,528
Total number of hits on all images: 6,611,344 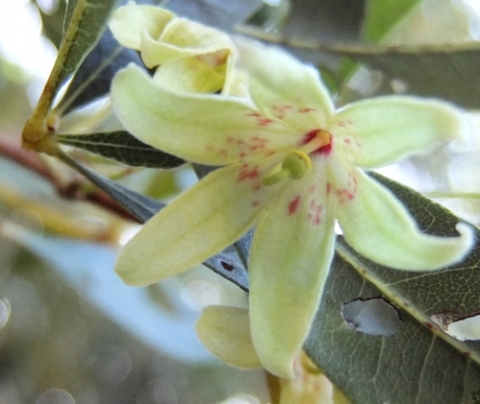 The flowers of Sterculia alexandri grow in branched sprays from leaf axils, usually from late autumn to the end of winter. The calyx forms the flower shape, a shallow bowl, as there are no petals; still the flowers are pretty. The calyx is fused at the base, its lobes ascending as they spread, their tips recurving. Flower colour is greenish, cream or pale yellow with varying concentrations of claret coloured markings present in the flower base.

The first flowers to open have only the male (stamen) parts that cohere in a central cluster; later flowers may have both stamens and styles. Flower diameter is about 2 cm.

One to five fruit follicles follow the flower, seen on the tree up to mid-spring. The follicles become up to 9 cm long and are joined at the base. They will split open on one side only. The seeds are edible, having a nutty flavour (Coates Palgrave, 2002; Gledhill, 1981).