Home » TYPES » Trees » Sesamothamnus lugardii
Back to Category Overview
Total images in all categories: 11,506
Total number of hits on all images: 6,514,079 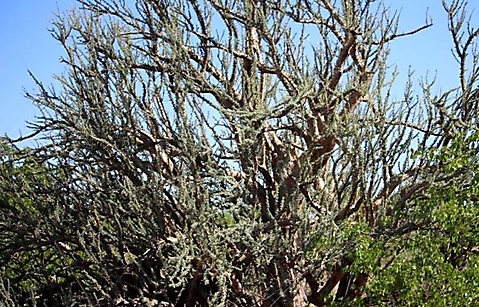 Sesamothamnus lugardii, commonly known as the Transvaal sesame-bush, is a squat, succulent shrub or small tree reaching 4 m in height (SA Tree List No. 680). It reminds of a miniature baobab or a modified spekboom.

Multistemmed and swollen in the old, lower parts, the finely peeling bark is grey, sometimes mottled yellow. The stiff, erect, upper branches are armed with spines that are up to 1 cm long and sometimes curved.

The obovate to elliptic leaves grow in clusters above the spines, their tips rounded or notched. The petioles are short, up to 3 mm long. Blade halves fold in along the midrib that is prominent below. The grey, greenish grey to whitish grey leaves are covered in glandular hairs, densely on the lower surfaces. Leaf dimensions are 1 cm to 2,5 cm long and 0,5 cm wide.

The trumpet-shaped, white flowers grow in groups of three on shoots that vary in length. The flower tube is up to 8 mm long. There is a spur below and five rounded, spreading corolla lobes around the mouth. Flower diameter is up to 6 cm.

The fruit is a flat, woody capsule, rectangular to heart-shaped and greyish brown. It is notched at the tip and about 6 cm by 5 cm. The ripe capsule dehisces, releasing seeds with papery wings.

The species distribution is in Limpopo, Mpumalanga and North West, as well as in some neighbouring countries.

The habitat is hot, dry bushveld or mopane woodland among rocks in sandy or calcareous soils. The species is not considered to be threatened in its habitat early in the twenty first century (Coates Palgrave, 2002; Schmidt, et al, 2002; iNaturalist; http://redlist.sanbi.org).