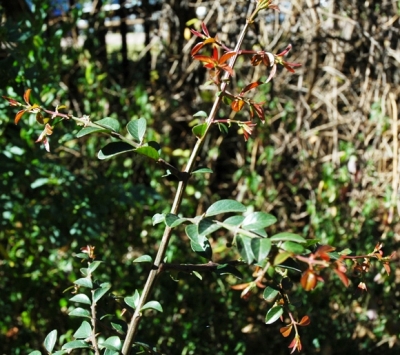 Scutia myrtina, commonly the cat-thorn and in Afrikaans the bos-wag-'n-bietjie (bush-wait-a-while), is sometimes a shrub or even a climber, but may also be a small tree of up to 8 m in height (SA Tree List No. 451). This is the only species of its genus in South Africa, the other two widespread in parts of the tropics.

The new growth in picture is red-brown and sparse, the plant deciduous.

The species distribution is along South Africa's south and east coasts from the Western and Eastern Cape through KwaZulu-Natal to Mozambique, as well as inland in the Mpumalanga and Limpopo Lowveld.

The habitat is coastal scrub and forest margins from sea level to 1200 m. The species is not considered to be threatened in its habitat early in the twenty first century.