Home » TYPES » Trees » Sclerochiton harveyanus
Back to Category Overview
Total images in all categories: 11,104
Total number of hits on all images: 5,771,754 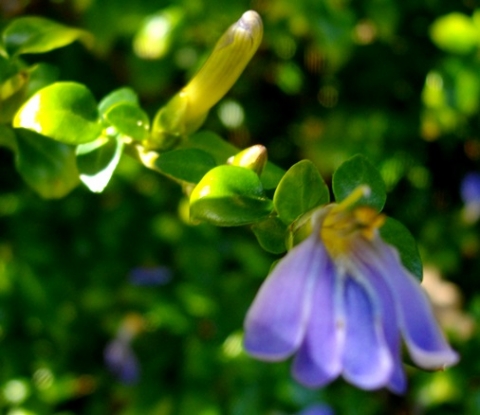 The leaves are short-stalked, petioles up to 8 mm long. Leaf shape is ovate to elliptic and anisophyllous, i.e. highly variable in shape and size. Leaf margins are not always toothed, the teeth tending to be irregular and blunt. There may be hairs along the midrib on the lower surface of the leaf that is dull green, the upper one glossy. Leaf sizes range from 1,5 cm to 7 cm long and from 1 cm to 3 cm wide.

The flowers grow solitary from leaf axils. The calyx is five-lobed. The corolla tube is short, the four stamens protruding from it. The unscented, purplish blue corolla is one-lipped and five-lobed; the oblong, round-tipped lobes here white-margined. The corolla is 2 cm by 1,2 cm. Flowering happens in late summer and early autumn.

The fruit is a thinly woody, ellipsoid capsule with tapering, beak-shaped tip. Its five valves split explosively when ripe to release the oblong, rough-surfaced seeds. The fruits are seen in autumn.

The species is distributed in the eastern parts of South Africa from the Eastern Cape to Limpopo and in some neighbouring countries, at least in Swaziland, Zimbabwe and Mozambique.

These shrubs often form the understorey in evergreen forests, growing in large stands. They are also found on forest margins. The species is not considered to be threatened in its habitat early in the twenty first century.

Six of the twelve Sclerochiton species are found in southern Africa, the others all African (Coates Palgrave, 2002; Van Wyk and Van Wyk, 1997; Leistner, (Ed.), 2000; iSpot; www.redlist.sanbi.org).