Home » TYPES » Trees » Sclerocarya birrea subsp. caffra bare in winter
Back to Category Overview
Total images in all categories: 11,901
Total number of hits on all images: 7,142,243 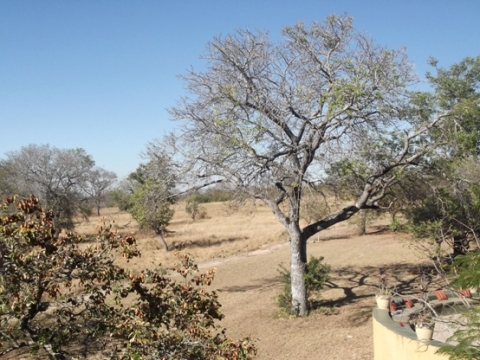 Sclerocarya birrea subsp. caffra is a medium to large, deciduous tree, here leafless in midwinter (SA Tree List No. 360). Heights around 18 m may be achieved. The tall specimen looking grey in the half-hearted July sun, is growing in the camp at the Vuyatela Lodge of the Djuma Game Reserve. The tree is a common sight in open woodland.

Marula has been an important food source for people and game in Africa for a very long time. Evidence was found in a cave in Zimbabwe of human consumption of marula fruit as well as the nutty flavoured hard kernels, dating back to about 12 000 years ago.

Several moth species breed on the marula, including the lime green African moon moth or luna moth, Argema mimosae. This spectacular silk moth is named specifically for a relationship with thorn trees although it feeds on leaves of a series of other resinous trees as well.

People who breed these moths feed the larvae on Eucalyptus leaves. The moth occurs in the eastern parts of South Africa. It reaches a wingspan of 12 cm and is even longer from its head to the dark tips of its lime green hind-wings (Ezemvelo Rhino Club Newsletter, Nov. 2012; Wikipedia).

A Combretum zeyheri tree still covered in leaves and brown winged fruits can be seen in the left foreground.