Home » TYPES » Trees » Sclerocarya birrea subsp. caffra
Back to Category Overview
Total images in all categories: 12,087
Total number of hits on all images: 7,392,870 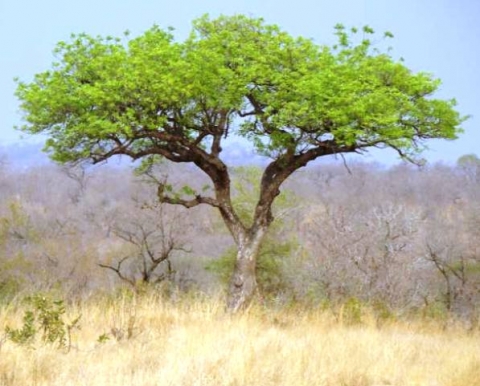 Sclerocarya birrea subsp. caffra, the marula, is a large erect tree growing in many parts of the summer rainfall areas of Africa. It is dioecious and deciduous, grows with a single erect stem and develops an imposing, spreading crown when mature.

The bark is grey and rough, flakes in small sections, creating a patchy appearance. The leaves are compound, alternate and concentrated towards the end of branchlets. The leaflets are elliptic and there is a terminal leaflet.

The marula has been providing food to indigenous people of Africa for thousands of years and still does. The fruit, yellow drupes by the time that they lie under the tree, have a tart taste sought after by humans and several animal species. The fruits have a walnut sized stone in the centre, containing two or three seeds, sought after by several rodent species.

These fruits are the basis of Amarula liqueur. Many traditional medicinal uses have been recorded for parts of this tree in different countries (Coates Palgrave, 2002; www.plantzafrica.com).