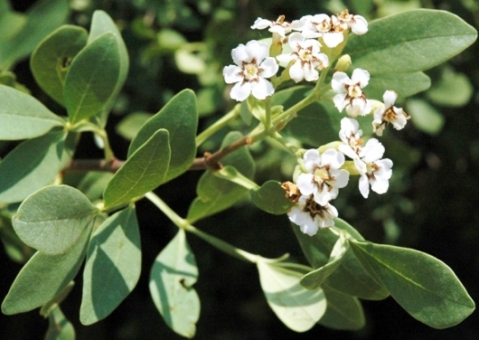 Schrebera alata (SA Tree List No. 612) is a small tree of north-east South Africa and several southern African countries, particularly Zimbabwe. It is called the wing-leaved wooden-pear, a name that describes the fruit, a woody, flat, pear-shaped capsule. This fruit splits open in autumn or winter, releasing about eight flat seeds with papery wings.

The flowers as shown in the photo are usually white, although they may sometimes be pale pink. These flowers have also contributed a common name for the species, viz. wild jasmine. The corolla tube is about 1,5 cm long. At the tube mouth from where the corolla lobes spread, clusters of reddish hairs can be observed. The scented flowers grow in terminal heads. The fragrance is more notable at night, raising the question of moth or other nocturnal pollinators. The blooming season is long, sometimes lasting from spring to the end of autumn.

One notable large specimen of S. alata, growing near Marondera in Zimbabwe and hailed as the Tree Without A Name, bears interesting folklore (Coates Palgrave, 2002).