Home » TYPES » Trees » Schinziophyton rautanenii
Back to Category Overview
Total images in all categories: 11,528
Total number of hits on all images: 6,614,414 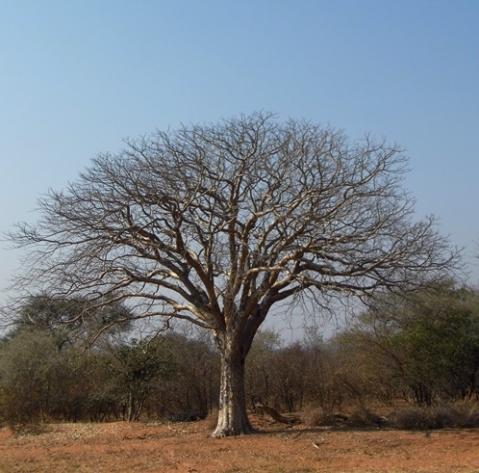 Schinziophyton rautanenii is commonly known as the manketti tree, the featherweight tree or in Afrikaans as the Transvaal okkerneut (Transvaal walnut) and previously as Ricinodendron rautanenii. It is a large tree with spreading, rounded crown at heights of 15 m to 20 m (SA Tree List No. 337).

Seen here in winter, the deciduous tree is also dioecious, male and female flowers growing on separate trees. The tree is a pachycaul, meaning that it has a huge trunk compared to the size of its branches, not obvious from the photo. The wood is comparable to balsa wood. The plant contains latex. The taproot becomes very long in search of water.

The leaves are alternate to spiralling, long-stalked and digitately compound. Two prominent glands are present at the top of the petiole (leaf stalk). Each leaf has five (to seven) stalked leaflets and small stipules at the petiole base. The leaflets are ovate or elliptic to oblanceolate, tapering at the base and broadly tapering at the tip. The leaflets are dark green above and pale grey below. They turn yellow in the fall. Hairier below than on their upper surfaces, the leaflet stalks are also densely covered in furry hairs. Leaflet dimensions are 6 cm to 16 cm by 2 cm to 9 cm.

Yellow flowers of 1 cm in diameter appear in terminal sprays or panicled cymes in the later part of spring.

The ovoid fruit is a grey-green nut-like drupe, initially hairy. Each fruit contains one or up to three hard seeds with edible kernel embedded in the outer, sweet flesh of the ripe fruit.

Trees become about 25 years old before they bear fruit. A mature (female) tree may produce around 950 fruits per annum. The fruit fall, maturing on the ground.

Elephants eat the fruit, the seed remaining intact in its hard covering for later growth from the dung as “prepared” and dispersed by the elephant. Kudu also eat these fruits, but regurgitate them, resulting in similar quality dispersal services to the tree. Local people make porridge of the dried fruit pulp. Cracking the shell of the nut gives access to the oily kernel, another delicacy.

The tree is found widespread in southern Africa, while in South Africa only in a small region in the west of Limpopo near the border. The habitat is bushveld, the trees growing in Kalahari sand, sometimes in almost pure sand. The species is not considered to be threatened in its habitat early in the twenty first century.