Home » TYPES » Trees » Salix mucronata subsp. woodii
Back to Category Overview
Total images in all categories: 11,921
Total number of hits on all images: 7,168,379 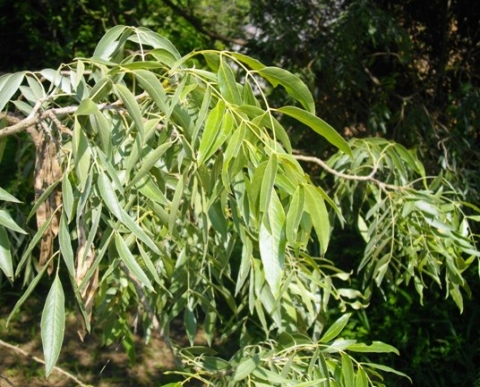 Salix mucronata subsp. woodii, the flute willow, is a deciduous shrub or tree with drooping branches that may grow to 12 m, but usually does not reach much beyond 3 m (SA Tree List No. 36.2). S. mucronata used to be called S. subserrata, a now discarded name.

The leaves are lanceolate and velvety or hairless. Spring leaves are smaller than the summer leaves that exceed 6 cm in length. The leaf margins may be entire or serrated. Young branchlets and leaves are grey.

The Salix genus is dioecious, as is its family, the Salicaceae. Therefore expect to find the male and female flowers on separate trees; fruit only on some trees, the female ones.

Tiny yellow male and green female flowers grow in spikes early in spring and sometimes again in autumn. The flower spikes are about 2 cm long. The fruit is a small capsule that splits to release tufted, woolly seeds that are wind dispersed.

S. mucronata is almost invariably found next to river banks and other watercourses. The tree is often damaged by flood waters, sometimes recovering in modified shape when not uprooted. The distribution is rivers of northern KwaZulu-Natal, Mpumalanga and Limpopo flowing into the Indian Ocean, therefore also rivers in the provinces north of the Vaal River.

Much reorganisation of southern African indigenous Salix trees is reported in the literature, some of it confusing. Only S. mucronata is indigenous, divided at times into up to five subspecies, based on geographical distribution and appearance.

SANBI currently (2020) recognises only three, viz. subsp. mucronata occurring in the north of the region, probably beyond the border in southern Africa, subsp. woodii (including subsp. wilmsii) occurring in Gauteng, Mpumalanga and KwaZulu-Natal and subsp. hirsuta in the Olifants River region of the west of the Western Cape.

The subspecies identification of the trees occurring in the southern Cape, e.g. in Meiringspoort, the Eastern Cape and possibly in some other parts of South Africa is intriguing. Since S. mucronata subsp. capensis now forms part of subsp. mucronata, the latter subspecies either straddles subsp. woodii in discrete distributions, (partly) overlaps it geographically or awaits further updates.