Home » TYPES » Trees » Putterlickia verrucosa in fruit
Back to Category Overview
Total images in all categories: 12,087
Total number of hits on all images: 7,392,901 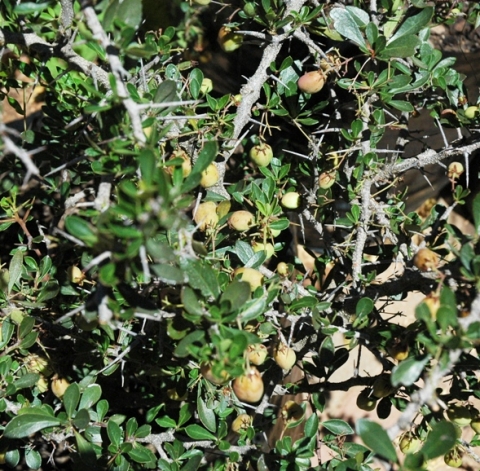 Putterlickia verrucosa (SA Tree List No. 403.2), the forest false-spikethorn, is a spiny, slender to straggling shrub or small tree, sometimes a scrambler.

The leaves are fascicled on dwarf spur-branchlets. They are oblanceolate or obovate in shape with rounded or notched tips. The leaf surface is leathery, hairless, and grey-green or glossy with more evidence of the net-veining on the lower surface than above. The margin is entire near the base, toothed in the upper parts, sometimes rolled under.

The fruit, as can be seen in this photo are ovoid, pink or cream coloured, woody, three-valved capsules. As they ripen the colour may change to reddish brown by winter. Each capsule contains two to eight seeds. The seeds are covered by red-brown arils.

The tree occurs in the Eastern Cape, KwaZulu-Natal, Swaziland and Mozambique. The habitat is evergreen or dune forests or thickets. The species is not considered to be threatened in its habitat early in the twenty first century (Coates Palgrave, 2002; Schmidt, et al, 2002; http://redlist.sanbi.org).