Home » TYPES » Trees » Putterlickia pyracantha stages of transformation
Back to Category Overview
Total images in all categories: 11,528
Total number of hits on all images: 6,610,454 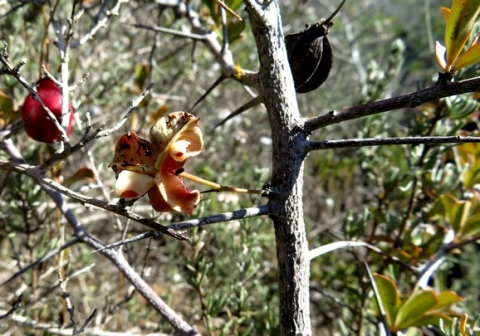 Three stages of the Putterlickia pyracantha fruit are present on this sparsely leaved shrub growing in dune scrub. The youngest on the left is still closed and red, the middle one widely dehisced. A couple of seeds almost covered in pale arils are still attached on the inside of the dry husk. The blackish capsule on the right is probably from earlier in the fruiting season that started in February, its seeds gone and the three spread lobes half-closed again.

Fruits are found on the shrub mainly between the end of summer to the end of winter. The photo was taken in August at Boggomsbaai west of Mossel Bay.

The bark is sometimes red-brown, in picture pale grey. It may be covered in a waxy layer that peels and reveals pale lenticels. The sparsely scattered spines are long, hard, straight and sharply pointed. The spines that become up to 5 cm long sometimes have leaves growing from them (Coates Palgrave, 2002; Van Wyk and Van Wyk, 1997; Pooley, 1993; iSpot).