Home » TYPES » Trees » Putterlickia pyracantha capsule extended
Back to Category Overview
Total images in all categories: 11,419
Total number of hits on all images: 6,200,253 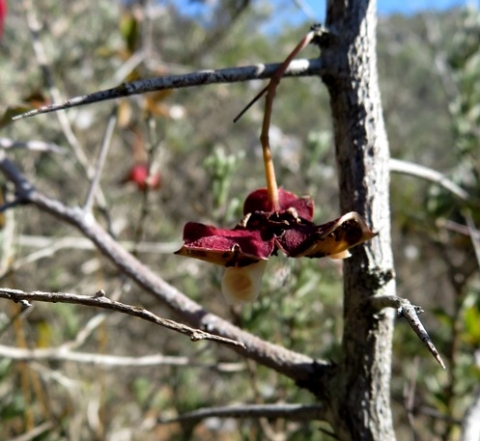 Spread widely here, the lobes of the Putterlickia pyracantha fruit have assumed a purplish colour upon their wrinkled outer surfaces. The inside surfaces are dull creamy yellow. The margins of the lobes are thickened, the seams prominent where they were firmly attached to each other when the seeds were developing inside the then ovary.

There is still a pale seed inside its aril dangling below the spreading husk in picture. The fruit hangs from a jointed stalk that may be up to 3 cm long.

The spines in picture also appear jointed, indicating the nodes where leaves may have been attached earlier. The bark on the stems is pale grey and rough (Coates Palgrave, 2002; Van Wyk and Van Wyk, 1997; Pooley, 1993; iSpot).