Home » TYPES » Trees » Putterlickia pyracantha
Back to Category Overview
Total images in all categories: 12,061
Total number of hits on all images: 7,359,869 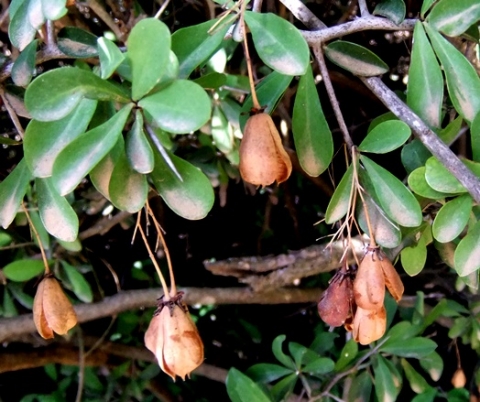 Putterlickia pyracantha, the false spike-thorn, is usually a spiny, often multi-stemmed shrub, occasionally a tree up to 6 m in height (SA Tree List No. 403.1).

The leaves are obovate with rounded tips, sometimes notched, growing alternate or in whorls. The leaf base tapers into a short petiole up to 4 mm long, but in picture about absent. The leaf margin is entire, sometimes rolled under and wavy but not in picture. It may also be finely toothed or scalloped.

The blade is leathery, dark green and somewhat glossy. Its midrib is visible, slight folding of the blade along it. Net-veining is more visible upon the lower surface. Leaf dimensions are 1,5 cm to 7 cm by 1 cm to 3,5 cm.

The flowers are white, growing in axillary heads of spiny side-branches during summer.

The species distribution is along the south coast in the Western Cape and Eastern Cape, maybe also in the Free State. This plant was seen in August near Addo.

The habitat is scrub, fynbos and dune forest. The species is not considered to be threatened in its habitat early in the twenty first century (Coates Palgrave, 2002; Van Wyk and Van Wyk, 1997; Pooley, 1993; iSpot; http://redlist.sanbi.org).