Home » TYPES » Trees » Putterlickia pyracantha fruit
Back to Category Overview
Total images in all categories: 11,539
Total number of hits on all images: 6,622,018 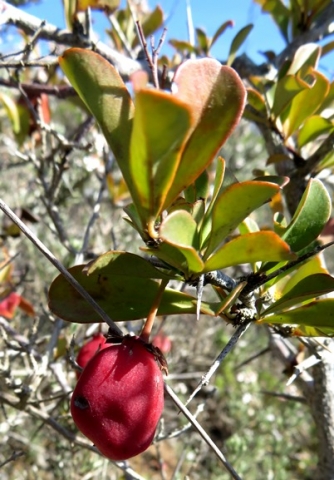 The ripe, red fruit of Putterlickia pyracantha appears fleshy and mottled before it dries out. The three-segmented capsule is three-sided, triangular in cross-section, wider near the tip than the base. The pinkish red surface is faintly mottled and still fleshy. The fruits are sometimes cream coloured. P. pyracantha fruit may become from 1 cm to 2 cm long.

The leaves in picture are not glossy, but yellow-green with a reddish tint on some upper parts and margins. Notched leaf tips and folding along the leaf midribs are common on this plant.

The specific name, pyracantha, is derived from the Greek words pyrrho- meaning fire, fiery red or red and anthos meaning flower. This is odd as the flowers are white, the fruit (sometimes) red. Maybe the Greek word karpos (fruit) would have been a more appropriate choice, resulting in something like pyrocarpa.

But the word puracantha was already established in the first century AD, used by Dioscorides, a Greek physician, to name a different plant of the Mediterranean region. He also wrote authoritatively in his day about botany. The large genus Dioscorea, the yams, was named after him by Linnaeus in the eighteenth century (Coates Palgrave, 2002; Van Wyk and Van Wyk, 1997; Pooley, 1993; Andrew, 2017; iSpot).