Home » TYPES » Trees » Pterocelastrus tricuspidatus
Back to Category Overview
Total images in all categories: 12,087
Total number of hits on all images: 7,392,887 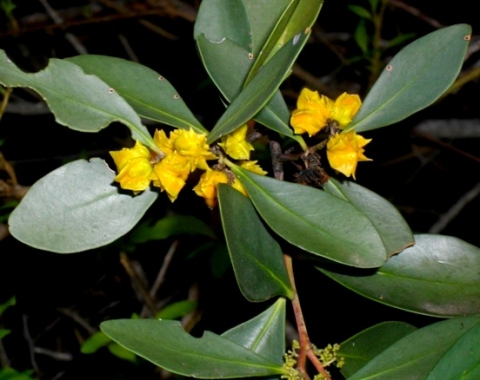 Pterocelastrus tricuspidatus is a shrub or small tree of up to 7 m (SA Tree List No. 409). It is an attractive tree that has a fair collection of common names earned in the regions where it grows, including cherrywood, candlewood and its Afrikaans equivalent, kershout.

The fruits appear yellowish here. They often bear a more orange colour. Maybe these are yet too young, as fruiting is normally expected only from July. The fruits are three-lobbed and have one or two characteristic little horns, recognised in the specific name.

The southerly distribution ranges from the Cape Peninsula to southern KwaZulu-Natal in a broad coastal swathe. A second, separate part of the tree's natural distribution lies in Swaziland and northwards into Mpumalanga. The photo was taken in the southern Cape during May.

The habitat is forest margins, dry forests, dune scrub and rocky outcrops. The species is not considered to be threatened in its habitat early in the twenty first century (Coates Palgrave, 2002; http://redlist.sanbi.org).