Home » TYPES » Trees » Pterocelastrus echinatus
Back to Category Overview
Total images in all categories: 12,091
Total number of hits on all images: 7,393,165 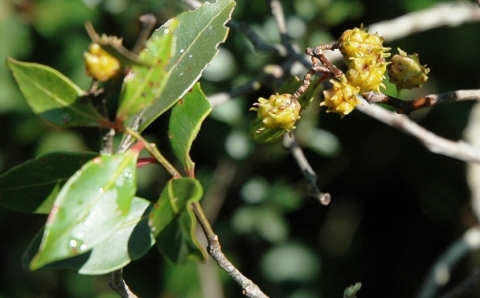 The white candlewood, as Pterocelastrus echinatus is commonly known, is typically a shrub of 2 m, occasionally a tree of 5 m (SA Tree List No. 405).

The leaves are lanceolate, elliptic or ovate. Leaf apices taper or are notched, the bases taper. Leaf margins are entire, sometimes rolled under. Leaf surfaces are leathery, hairless, deep green above and paler below.

The fruits are three-lobed capsules with a distinct ridge and spiky horn on each lobe. Echinatus means armed with prickles or spines, referring only to the fruits. The surface of the fruit is covered in a waxy bloom. These fruits become orange, red and sometimes brown when ripening.  This happens in autumn and winter.

The species distribution is in all provinces north of the Vaal River, as well as in KwaZulu-Natal and the eastern extreme of the Eastern Cape.

The habitat is forest margins, scrub forests and rocky mountain slopes. The species is not considered to be threatened in its habitat early in the twenty first century, in spite of heavy harvesting for the traditional medicine trade (Coates Palgrave, 2002; Schmidt, et al, 2002; Pooley, 1993; http://redlist.sanbi.org).