Home » TYPES » Trees » Pterocarpus angolensis in winter
Back to Category Overview
Total images in all categories: 10,690
Total number of hits on all images: 5,351,831 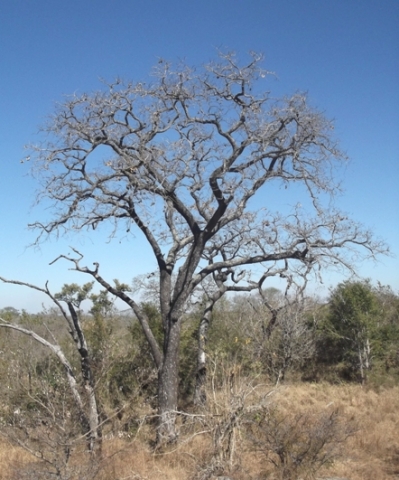 Pterocarpus angolensis (SA Tree List No. 236) grows where the climate is warm and the rainfall over 500 mm per annum. In South Africa the tree is only found in the far north-east, in parts of the provinces of Limpopo, Mpumalanga and KwaZulu-Natal. In tropical Africa it is found widespread.

Transvaal teak grows in sandy soil on rocky slopes of woodland and bushveld. This tall specimen with rounded crown was photographed in July on a granite slope near the Sabie River. Being deciduous, its midwinter garb is discarded, only some scattered pods remain, barely visible among the upper branches.

The erect, sturdy trunk is covered in dark grey bark with a rough texture. Scattered, pale patches of underbark can be seen along the surface where fissuring and flaking have occurred and reticulated pieces have peeled off (Van Wyk and Van Wyk, 1997).