Home » TYPES » Trees » Ptaeroxylon obliquum leaves
Back to Category Overview
Total images in all categories: 11,538
Total number of hits on all images: 6,617,356 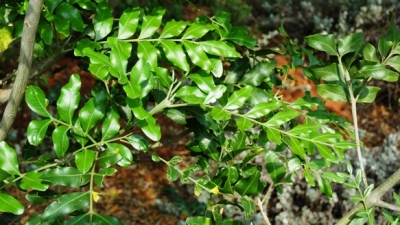 Sneezewood gets its name from the peppery oils in the wood that cause sneezing in those too close by when the wood is being sawn or sanded.  Ptaeroxylon is a combination of the Greek words for sneeze and wood.

The Xhosa name for the tree, umThathi gave the town of Mthatha, previously Umtata, its name; the tree is common in the Eastern Cape.  It also grows elsewhere in South Africa, in the eastern parts of KwaZulu-Natal, Mpumalanga and Limpopo.  The distribution area beyond South Africa is even larger, the tree being found as far afield as Angola and Tanzania.

The wood of Ptaeroxylon obliquum is hard and durable.  It has been used in many ways, among other things to manufacture railway sleepers.  The wood also burns very well and was in the distant past used to start fires by stick friction.  In Mozambique it is the preferred wood for the manufacture of xylophone keys.  The tree also features in some traditional medicine remedies (www.plantzafrica.com).