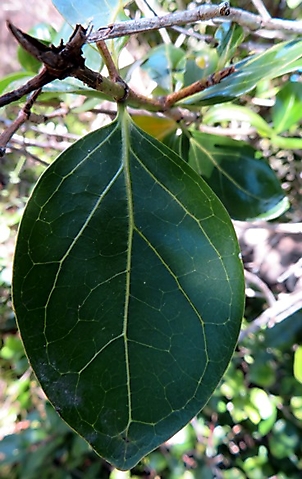 The simple leaves of Psydrax obovata subsp. obovata grow opposite on short stalks of 1 mm to 5 mm. There are stipules of 2 mm to 5 mm present between the petiole bases, sometimes only the stipule scars left.

The leaves are obovate or egg-shaped with their widest parts nearer the tips than the bases. In picture the leaf is slightly asymmetrical, the ovate-obovate issue debatable. The leaf-tips taper broadly or are rounded, the bases tapering. The margins are slightly rolled under.

The blades are thinly leathery and glossy dark green on top. They are paler on the lower surfaces but on top as well while young. Up to four pairs of cream-coloured lateral veins usually ascend from the midrib of each blade. They are raised on the lower surface and loop in before reaching the margins, joining the next higher vein instead.

There are often small domatia present on the lower surfaces, positioned in the lateral axils formed by the veins with the midrib. These domatia are hairless on this subspecies, hairy on the other one. The generic name, Psydrax, is a Greek word meaning blister on the tongue, referring to the leaf domatia.