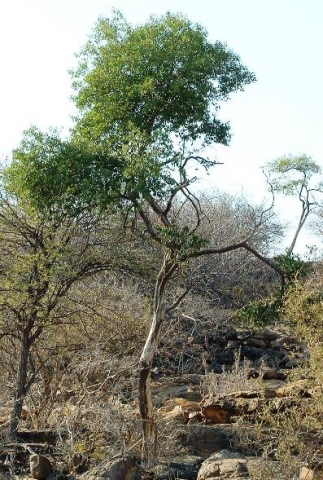 The leaves are mostly on young branches, positioned opposite on short petioles. Leaf shape is ovate. The leaves may be hairy, the margins are entire. The four or five pairs of lateral veins are raised on the lower surface.

The small, cream flowers have green tipped, reflexed petal lobes and conspicuous long styles. The flowers are strongly, unpleasantly scented. The fruit is about 1 cm long, oval to oblong in shape and brown or black when ripe at the end of summer.

The species distribution is north of the Vaal River, also in some neighbouring countries.

The habitat is bushveld, Kalahari sand, woodland or riparian vegetation among rocks. The species is not considered to be threatened in its habitat early in the twenty first century (Coates Palgrave, 2002; http://redlist.sanbi.org).