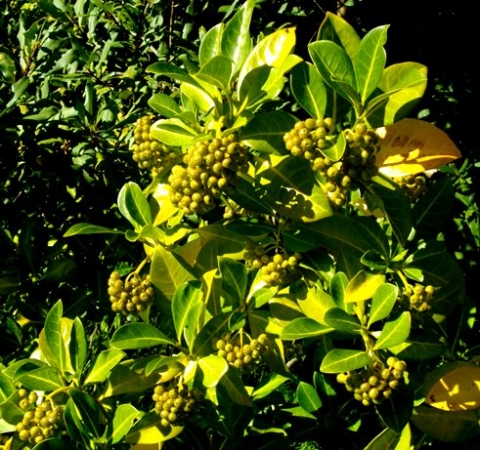 Lavish rounded clusters of Psychotria capensis subsp. capensis fruit on this tree are still in the early stage before their colour change to red and black. The spherical to slightly ovoid fruits become 5 mm to 7 mm in diameter. Psychotria forms part of the coffee family.

The stalked, opposite leaves are obovate to elliptic in shape. The leaf margins are entire. The leathery leaves tend to be darker when the tree grows in a forest than in the open. The midrib and four to six pairs of lateral veins are visible, prominent on the lower surfaces where domatia are present in the junctures of the lateral veins to the midrib.

Domatia are small chambers inhabited by arthropods like mites and ants. As vacuums tend to be filled, domatia are natural housing schemes that somehow acquire inhabitants without trying, like early man was attracted to caves (Coates Palgrave, 2002; Van Wyk and Van Wyk, 1997; Wikipedia).