Home » TYPES » Trees » Psychotria capensis subsp. capensis
Back to Category Overview
Total images in all categories: 12,081
Total number of hits on all images: 7,379,565 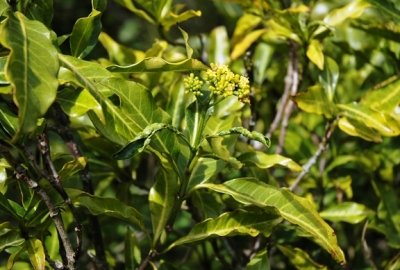 The black bird-berry or in Afrikaans lemoenbos (orange bush) as Psychotria capensis subsp. capensis is commonly known, is a small, evergreen tree, typically growing to heights from 3 m to 8 m (SA Tree No. 723).

The subspecies is found in nature along the South African south and east coasts from the eastern parts of the Western Cape, through the Eastern Cape to KwaZulu-Natal and inland in the Lowveld of Mpumalanga and Limpopo.

The habitat is varied, including dune bush, evergreen forests and their margins, riverbank forest and rocky outcrops in high rainfall grassland. The trees occur from sea level to elevations around 1500 m (Coates Palgrave, 2002; Pooley, 1993; http://pza.sanbi.org; http://redlist.sanbi.org).