Home » TYPES » Trees » Podocarpus latifolius
Back to Category Overview
Total images in all categories: 11,901
Total number of hits on all images: 7,142,169 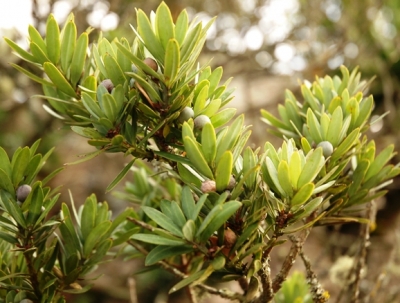 Podocarpus latifolius is the broad-leaved yellowwood or real yellowwood, the declared National Tree of South Africa.  It reaches heights to 30 m (SA Tree List No. 18).

The species distribution is widespread in the south and east of South Africa, occurring in all provinces apart from North West. The broad range enters only slightly into the east of the Free State and the southwest of the Northern Cape. The tree is also found in several other African countries.

The habitat is evergreen and montane forest. The trees are usually small and stunted where they grow exposed on mountain slopes. The species is not considered to be threatened in its habitat early in the twenty first century (Coates Palgrave, 2002; www.plantzafrica.com; http://redlist.sanbi.org).