Home » TYPES » Trees » Podocarpus henkelii
Back to Category Overview
Total images in all categories: 12,081
Total number of hits on all images: 7,379,574 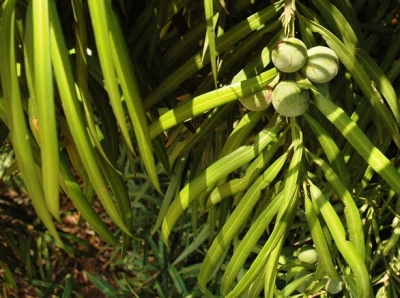 The characteristic long, narrow, curved and drooping leaves taper at both apex and base. The tree is dioecious with large, light green oval fruits (occurring on the female trees).

The species distribution is in the east of the Eastern Cape and the south of KwaZulu-Natal, also the east of Lesotho.

The habitat is moist evergreen forests in mountainous areas, to some extent also coastal forests. The species is not considered to be threatened in its habitat early in the twenty first century (Coates Palgrave, 2002; http://redlist.sanbi.org).