Home » TYPES » Trees » Afrocarpus falcatus stem
Back to Category Overview
Total images in all categories: 8,905
Total number of hits on all images: 3,877,188 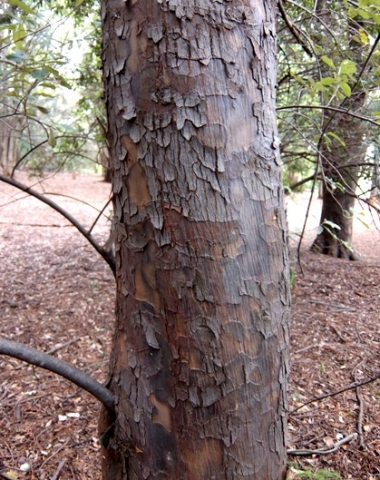 The main stem of Afrocarpus falcatus grows straight, erect and tall, rarely to 60 m. Its bark is thin, smooth and ridged on younger stems and peeling off in rectangular or round flakes from older ones. Greyish to dark brown in colour on older parts, the exposed patches of newer layers display various shades of red brown to pale buff.

Near the stem tips the branchlets are thin, less than 1,5 mm in diameter, often square in diameter and ridged.

The tree's name has been changed from Podocarpus falcatus, still belonging to the Podocarpaceae or yellowwood family, but now in its own genus; only these two genera of Podocarpaceae occurring in Africa, seven worldwide.

This species is distributed in a broad coastal strip from the southern Cape, Eastern Cape and KwaZulu-Natal, as well as in the Mpumalanga and Limpopo Lowveld. The distribution continues into Mozambique and inland in tropical Africa.

A. falcatus becomes the tallest tree in the moist forests where it grows, shorter where the rainfall is less. It is likely to be found in swamp and sandy forest, wooded ravines and afromontane forest along the escarpment. The species is not considered to be threatened in its habitat early in the twenty first century (Schmidt, et al, 2002; Pooley, 1993; www.iucnredlist.org).