Home » TYPES » Trees » Podocarpus falcatus
Back to Category Overview
Total images in all categories: 11,528
Total number of hits on all images: 6,611,403 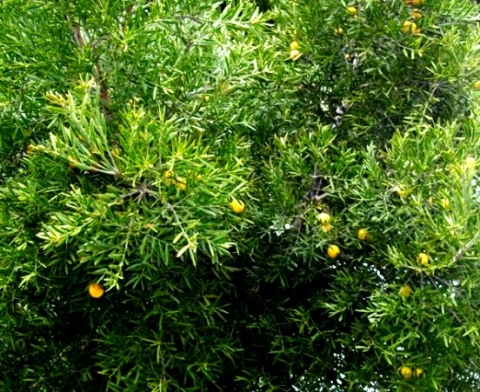 Podocarpus falcatus, commonly the small-leaved yellowwood or in Afrikaans the kalander or Outeniqua-geelhout and previously botanically Afrocarpus falcatus, is a medium-sized to large tree of heights between 20 m and 60 m (SA Tree List No. 16).

The kalander name followed an earlier name, Outeniekwalander (Outeniqua dweller or citizen), as a colloquially shortened form. The kalanders become the tallest trees of their forest.

This yellowwood is shown bearing its yellow fruits among the leaves. The fruit develops from the female cone that grows on a woody stalk without fleshiness on the receptacle at its base. These fruits are nearly spherical and fleshy, 1,5 cm in diameter. They take about a year to develop on the tree, almost ensuring that there will be some of them in one or other stage of development to be seen at all times during the tree's life.

The species distribution is in a broad, coastal swathe from the Western and Eastern Cape to KwaZulu-Natal and inland to the Mpumalanga and Limpopo Lowveld. The distribution continues into Mozambique and other countries to the north in tropical Africa.

The habitat is tall, moist forests and swamp forests, also in drier wooded ravines and montane forest where the trees are shorter. The species is not considered to be threatened in its habitat early in the twenty first century.