Home » TYPES » Trees » Podocarpus elongatus male cones
Back to Category Overview
Total images in all categories: 12,061
Total number of hits on all images: 7,359,932 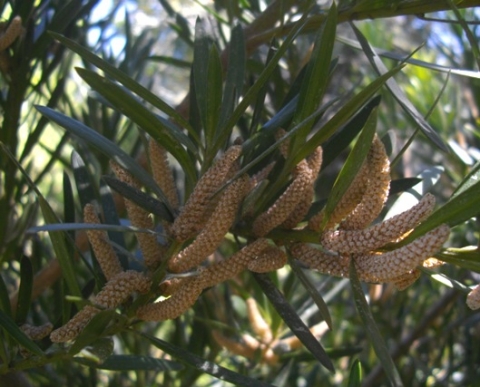 These male catkin-like (pollen) cones of Podocarpus elongatus, curving like caterpillars, were seen in October. They grow in leaf axils, quite a few of them clustered together. The cylindrical cones become 2,5 cm long, 3 mm wide and are beige in colour here.

Many of the yellowwood species, although not all, are dioecious. So, look for the female cones on the next tree, hopefully not too far from the male one for pollination to occur.

South Africans may wrongly think that their few famous local species of yellowwood comprise an exclusive local genus. There are many more, different species not seen here, growing in Australia, New Zealand, Central America, even Asia and elsewhere. The Podocarpus genus of conifers was endemic to Gondwana long ago, the supercontinent from which several of today’s continents had separated. Every continent, upon parting, carried away with it a share of these trees on their mighty journeys, as well as all the other plant and animal species living upon them at the time.

Separate evolution and distribution continued, without further interaction with the distantly migrated relatives left behind, creating accelerated diversification. The changed land masses thus boosted the morphing of species due to their unique climatic fortunes and natural histories.

All of this gave each continent, among many other things, its own set of Podocarpus species from what was once a close set of "acquainted" relatives; and still earlier just one species (Coates Palgrave, 2002; iSpot; Wikipedia).