Home » TYPES » Trees » Podocarpus elongatus
Back to Category Overview
Total images in all categories: 11,528
Total number of hits on all images: 6,611,331 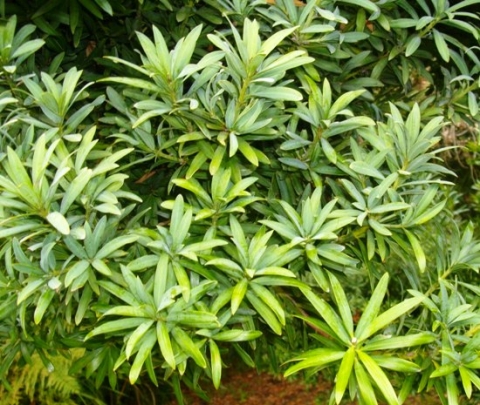 The Breede River yellowwood does not grow as tall as the other three well-known South African species of the Podocarpus genus. The growth is spreading and multi-stemmed, often more of a rounded shrub than a tree (SA Tree List No. 15). The bark is smooth, brown or grey and sometimes peeling in narrow strips.

The leaves are spirally arranged or sometimes sub-opposite, clustered towards the end of branchlets. Leaf colour is grey-green to bluish, the tree evergreen like the other yellowwoods. The leaf-shape is narrow, elliptic with acutely pointed tips. The margins are smooth and entire.  There are scattered stomata or pores and a grey-blue bloom on both surfaces. The stomata are absent in Podocarpus latifolius, helping in the identification of these somewhat similar species.

Like the rest of the Podocarpus genus, this conifer carries its seeds in round, red shells or receptacles with fleshy skins. The fruits grow, of course, only on the female trees, attracting birds.

The species distribution is in the Western Cape from Clanwilliam and the Bokkeveld Mountains to Swellendam.

The habitat is sandstone slopes in deep sandy soil next to rivers in the winter rainfall region. The species is not considered to be threatened in its habitat early in the twenty first century (Coates Palgrave, 2002; www.plantzafrica.com; http://redlist.sanbi.org).