Home » TYPES » Trees » Pittosporum viridiflorum flowers
Back to Category Overview
Total images in all categories: 11,528
Total number of hits on all images: 6,611,597 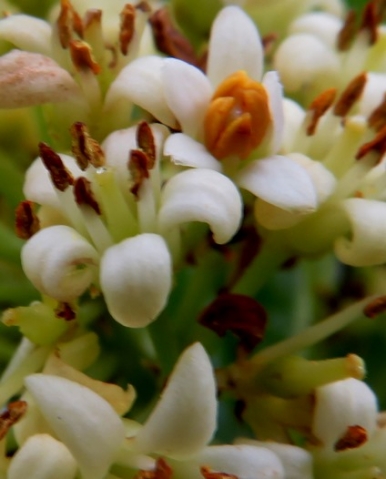 The flowers of Pittosporum viridiflorum are small and bisexual. Their fragrance is strongly honey-scented. The five sepals at the back are short.

The corolla consists of five fleshy, bluntly pointed petals attached to each other at the base and recurving gracefully in their upper parts, forming a trumpet-shaped tube. The petals are cream, creamy yellow or greenish white in colour. The specific name, viridiflorum, is derived from the Latin, meaning green flowered.

The five stamens alternating with the petals are similar in length as the petals. In the young flower in picture the stamens form a close ring, their beige-brown anthers curving in over the style. Ripe pollen escapes via longitudinal slits from the ovate-oblong anthers. In old flowers the stamens veer away from the centre, the anthers dark and shrivelled.